Lighting design is often inextricably tied to daylight, twilight and dark. Whether it is an outdoor structure illuminated with ambient light in mind, or an interior space attempting to replicate circadian rhythm; planning and playing back lighting is all about the time of day, or where the sun is right now.

To help you easily set this up we offer Real Time and Astronomical Timelines which allow you to layout your effects on a clock-based timeline, or to slowly fade through colours from sunrise to sunset, all without needing to programme triggers for those event transitions – the only trigger is to start one of these timelines and the timeline does the rest.

To start with, let’s look at Real Time Timelines. To add one, click the down arrow next to New in the Timeline view. This will automatically add a 24hr timeline to your view, stretching from midnight to midnight. 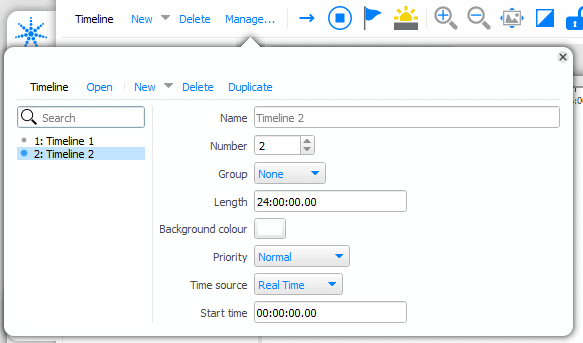 From here, you can see the time marks along the top of your Timeline. These will correspond to the time on the controller, so placing a preset at 8:00 will play back when the controller’s time is 8am.

In this example, while the timeline is running, the preset will start at a blue colour at 08:00. Throughout the day, the colour will slowly change to purple. Then, at 19:00, output will stop.

This set up is ideal for an office environment, for example, to change the light colour gradually throughout the work day. Real Time Timelines are great for Circadian rhythmic lighting, so starting the Crossfade preset at a cold white, then gradually changing the output to a warm white by the end of the day. 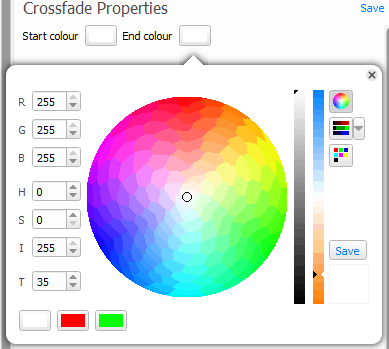 Now, we’re going to break down the Astronomical Timelines into sections.

These are markers that are placed on a Real Time Timeline that will move and adapt depending on the event they indicate. For instance, the Sunrise Waypoint will adjust its position to match the specific time of sunrise, depending on where you are in the world. This is tied to the location set in the Project tab. The Offset listed below will allow you to tweak the timing of the event, so we can run the preset 20 minutes before sunrise by entering -20 here, for example. 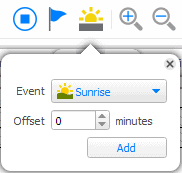 Once it has been added to the timeline, we will see a new marker above the timeline and some shading. We automatically create a start and end point, but these can be dragged to any time desired.

In this instance, any preset that ends before 3:00 or starts after 9:00 will not be affected by the Waypoint. However, everything that is present in the black section will speed up as the days get longer towards the summer, and the presets in the blue section will slow down. As the days get shorter, and sunrise gets later in the day, the inverse will happen.

So, for example, if we have this as our setup

If sunrise in our part of the world occurs at 4am, the Waypoint will automatically move during playback, so it would effectively look like this:

To do this, we increase the playback rate for the red preset, and decrease the playback rate for the blue preset. In this instance, with a static colour, this would have no visible effect, but with a dynamic preset, there would be a noticeable change. To mitigate this, we would suggest a longer preset with a larger lead in time, so the speed doesn’t have to increase as drastically. For example, in this case, the red preset must move at 3x the speed, whereas if the lead was from midnight, the speed would only have to increase by 1.5x.

Once the Astromincal Timeline has been added, it will appear as shown in the image. The two waypoints, indicating sunrise and sunset, will automatically adjust during playback on the controller in the same way as mentioned before.

Using this Timeline, you can easily create Timelines that will match the sunrise and sunset throughout the year without having to make any manual changes.

An example of how this would be used would be with a Timeline like this for a landmark:

Here the lights turn on at sunset, and fade from orange to red until midnight, then from red back to orange until sunrise. The lights then turn off during the day.

Importantly, Real Time and Astronomical Timelines do not, by default, release when they end. They are designed to run every day with minimal effort, so they effectively loop by default. To disable this, select the option to Release on End, found in the toolbar where Loop is usually placed. Once this is selected, your Timeline will only run once, releasing after the end time has passed. This is useful for Real Time or Astronomical Timelines that only need to run on one specific day, such as New Year’s Eve.

Ensuring the correct time on the Controller

Both Timeline types depend on the controller being set to the correct time. If this is syncing up with other devices, it is advised that your full system, Pharos Controllers included, runs off the same NTP (Network Time Protocol) server. These internet-based servers ensure your system runs at the same precise time and can be found online or set up by your network administrator. An example of a free online NTP server is 216.239.35.0, which is hosted by Google. It requires an internet connection, and can be set up by filling in the following field in the Controller’s config page: