The Friends Arena in Stockholm is Sweden’s national stadium for men’s football, and the largest stadium in Scandinavia with a maximum capacity of 75,000. The arena was named for the Swedish anti-bullying organisation Friends; an organisation that provides adults with research-based tools to prevent bullying among children and young people.

The arena is multi-functional and can easily be adapted in size to host everything from large scale sporting events to concerts. It was built to replace the much beloved Råsunda stadium which had opened in 1937 but started to show its age. Rather than going through the expensive process of trying to modernise the old arena, the brand new Friends Arena was built from the ground up.

The new arena was designed by Berg, C. F. Møller and Krook & Tjade as a high-tech, environmentally friendly structure with a dual-level façade made from sheets of micro-perforated embossed aluminium. Lighting designer Helena Åkerberg of Lighthouse AB created a beautiful wrap-around wall of colour which both welcomes visitors to the arena itself and provides light to the surrounding metropolitan area.

Stockholm Lighting supplied the 375 x Color Kinetics ColorGraze Powercore LED luminaires which are mounted every three metres behind the top and the bottom edges of the translucent façade, reflecting light off the white arena wall to create beautiful, saturated washes of colour.

The installation is controlled via eDMX, by a Pharos LPC X. The Pharos system with Designer 2 offers incredible flexibility for the exterior design including automatically turning the lights on and off at different times of day, illuminating the arena in accurate team colours, and allowing playful colour effects for special events.

The Friends Arena is already becoming as beloved as its predecessor and hopes to welcome visitors for many more years to come. 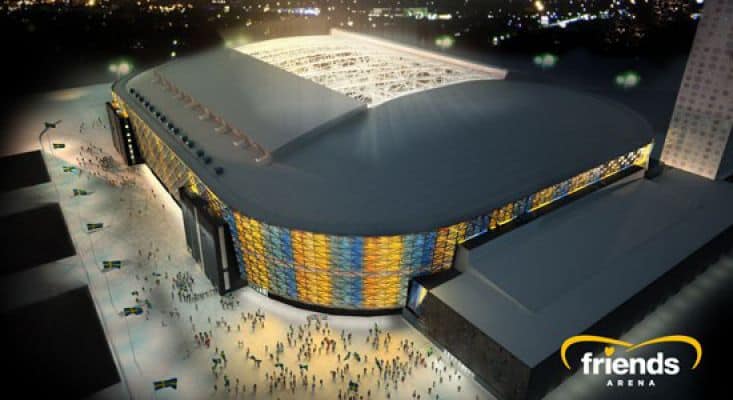